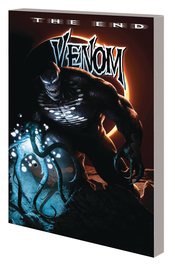 MARVEL COMICS (W/A) Erik Larsen, More (CA) Rahzzah Mighty Marvel heroes reach the bitter end! Steve Rogers fights for survival in a postapocalyptic wasteland populated by hordes of Red Skulls! Captain Marvel returns after 50 years in space – but what has become of the world she once called home? Deadpool seems unkillable – but death will find a way! Doctor Strange makes his final journey – through a cyberpunk sprawl where magic is forgotten! Miles Morales leads civilization’s last stand in the one place strong enough to survive: Brooklyn! And Venom travels the length of space and time as the last defender of life in the universe! Experience the end as your favorite heroes take their final bow! Collecting CAPTAIN AMERICA: THE END, CAPTAIN MARVEL: THE END, DEADPOOL: THE END, DOCTOR STRANGE: THE END, MILES MORALES: THE END and VENOM: THE END. Rated T+