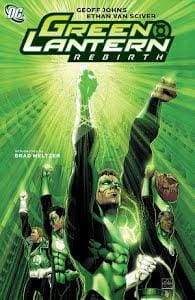 The 6-issue miniseries event of 2004-2005-written by Geoff Johns (BLACKEST NIGHT, TEEN TITANS) with art by Ethan Van Sciver and Prentis Rollins-is available in this new edition, complete with the preview story from Wizard Magazine as well as a number of extras previously only available in ABSOLUTE GREEN LANTERN: REBIRTH! Hal Jordan was considered the greatest Green Lantern of them all. But Jordan lost control, allowed himself to be corrupted and transformed into the villainous Parallax. Later, Jordan reappeared and made the ultimate sacrifice-a sacrifice that allowed him to become the Spectre, the Wrath of God. After several years of activity on Earth, The Spectre became restless and sought a way to prove himself worthy of that noble reputation. See how a man born without fear and seeking to rebuild his life, puts cosmic forces into motion that will have repercussions not only on Earth but across the universe. This volume sets up the events of BLACKEST NIGHT and revitalized Green Lantern as one of the most important heroes of the DCU!
Publisher DC
Published On May 11, 2010
Pages 192
ISBN 9781401236403
Language English
Genres Comics & Graphic Novels / Superheroes
{“@context”:”https://schema.org/&#8221;,”@type”:”Product”,”name”:”GREEN LANTERN REBIRTH TP NEW EDITION”,”image”:”https://cdn.shopify.com/s/files/1/0005/9260/9343/products/green-lantern-rebirth-tp-new-edition-graphic-novel-dc-comics-pop-stop_857.jpg?v=1543494227&#8243;,”category”:”Graphic Novel”,”sku”:”9781401227555″,”offers”:{“@type”:”Offer”,”priceCurrency”:”NZD”,”price”:”24.99″,”itemCondition”:”https://schema.org/NewCondition&#8221;}}