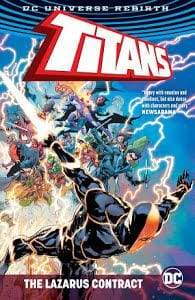 They are the greatest young heroes this world—or any world—has ever known. They are the Titans. And now, from the void between the worlds, one of their most legendary members has emerged. Wally West, a.k.a. Kid Flash, has returned. Powered by the Speed Force, he’s brought the secrets of time and space following in his wake. And with those secrets comes a prize that Deathstroke, the most lethal foe the Titans have ever faced, would do anything to claim: the rebirth of his long-dead son. Now Titans from every team—past, present or future—must unite to stop the killer called Slade from claiming his sinister prize. Can the Titans and the Teen Titans work together to stop this evil? Or will the two teams turn on each other, leaving Deathstroke to seize control? Discover the answer in TITANS: THE LAZARUS CONTRACT! One of the greatest Titans tales ever told, from the creative team of Christopher Priest, Dan Abnett and Benjamin Percy! Collects TITANS #11, TEEN TITANS #8, DEATHSTROKE #19-20 and TEEN TITANS ANNUAL #1.
Publisher DC Comics
Published On Nov 14, 2017
Pages 136
ISBN 9781401280963
Language English
Genres Comics & Graphic Novels / Superheroes
{“@context”:”https://schema.org/&#8221;,”@type”:”Product”,”name”:”TITANS THE LAZARUS CONTRACT HC”,”image”:”https://cdn.shopify.com/s/files/1/0005/9260/9343/products/titans-the-lazarus-contract-hc-graphic-novel-dc-comics-pop-stop_471.jpg?v=1543512357&#8243;,”category”:”Graphic Novel”,”sku”:”9781401276508″,”offers”:{“@type”:”Offer”,”priceCurrency”:”NZD”,”price”:”39.99″,”itemCondition”:”https://schema.org/NewCondition&#8221;}}